Plant a tree in memory of Kimberly
An environmentally-friendly option 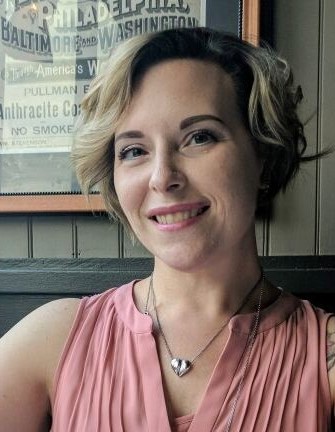 Kimberly “Kim” Cesarek of Burnsville, MN died on June 2, 2021, at age 42. She died as she lived, on her terms, in her home while holding the hand of her husband, Dustin. She lived the last 9 years of her life with Metastatic Breast Cancer (MBC).

Kim was born and raised in West Newton, PA. She graduated from Duquesne University in 2003 with a Doctorate in Pharmacy. She spent her career as a pharmacist working for Walgreens until her health forced her to leave her career behind. It was at Walgreens in 2009 that Kim met Dustin. From their first date they became immediately inseparable.

However, Kim eventually met the love of her life in October 2011 when their daughter, Reagan, was born. She loved being a mom with every fiber of her being. When Kim was diagnosed with MBC on July 16, 2012, she and Dustin decided to focus on the joy of their new family by getting married, which they did on September 16, 2012.

Aside from being a devout Pittsburgh Steelers fan, Kim was also Catholic and credited her grandmother, whom she loved dearly, as a constant in her early faith formation – a faith that became a foundation for the strength and positivity so many found inspiring later in Kim’s life.

Kim did not ask for the path she found herself on but embraced it wholeheartedly. Kim loved the sound of ocean waves crashing on the beach. She loved Disney and Harry Potter. She seemed to know the lyrics to every song. She loved cheese pizza and powdered sugar donuts. She loved her friends. Kim loved each day she was blessed with, no matter how difficult her cancer made it, because being able to watch Reagan grow up was Kim’s favorite blessing.

Kim’s work ethic and advocacy as a pharmacist translated well into her life with cancer. She loved being a resource to fellow thrivers and volunteered with various support organizations in the Twin Cities. Kim enthusiastically raised money, served on planning committees, and gave her voice to the MBC community.

Kim is survived by her husband Dustin, and her daughter Reagan, to whom Kim was the star in their sky, and many other family, friends, and admirers. Kim is predeceased by too many friends and family who were taken too soon by metastatic cancer.

Kim’s funeral will be held at St. John the Baptist Catholic Church in Savage, MN on July 13 at 11am. A visitation will be held the evening before, July 12, in the church atrium, from 5-7pm. A second visitation will occur prior to the funeral, beginning at 9:30am. In lieu of a reception afterwards, Kim’s remarkable life will be celebrated by those she inspired at the Lakeville Area Arts Center in Lakeville, MN on July 18 from 3-6pm.

To support other moms and dads hoping for a chance to watch their kids grow up, Kim asked that donations be made in her memory to METAvivor.

Plant a tree in memory of Kimberly by clicking here.
To send flowers to Kimberly's family, please visit our floral store.

A service summary is not available

Plant a tree in memory of Kimberly
An environmentally-friendly option

Plant a tree in memory of Kimberly

3 trees planted in memory of Kimberly

A lovely human has left us, again, too early. It was my privilege in having known you, Kim. Thank you for your honesty and friendship.
Andrés A. Parra

A Memorial Tree was ordered in memory of Kimberly Cesarek by Andrés A. Parra.  Plant a Tree

To: Kims family,
I am a sister in metastatic breast cancer with Kim and attended the Gilda house group with her. I love Kim and will miss her very much. My condolences to her family. God Bless,
Shelly Carey

A Memorial Tree was ordered in memory of Kimberly Cesarek by Shelly Carey.  Plant a Tree

A Memorial Tree was planted for Kimberly Cesarek

Plant a tree in memory of Kimberly